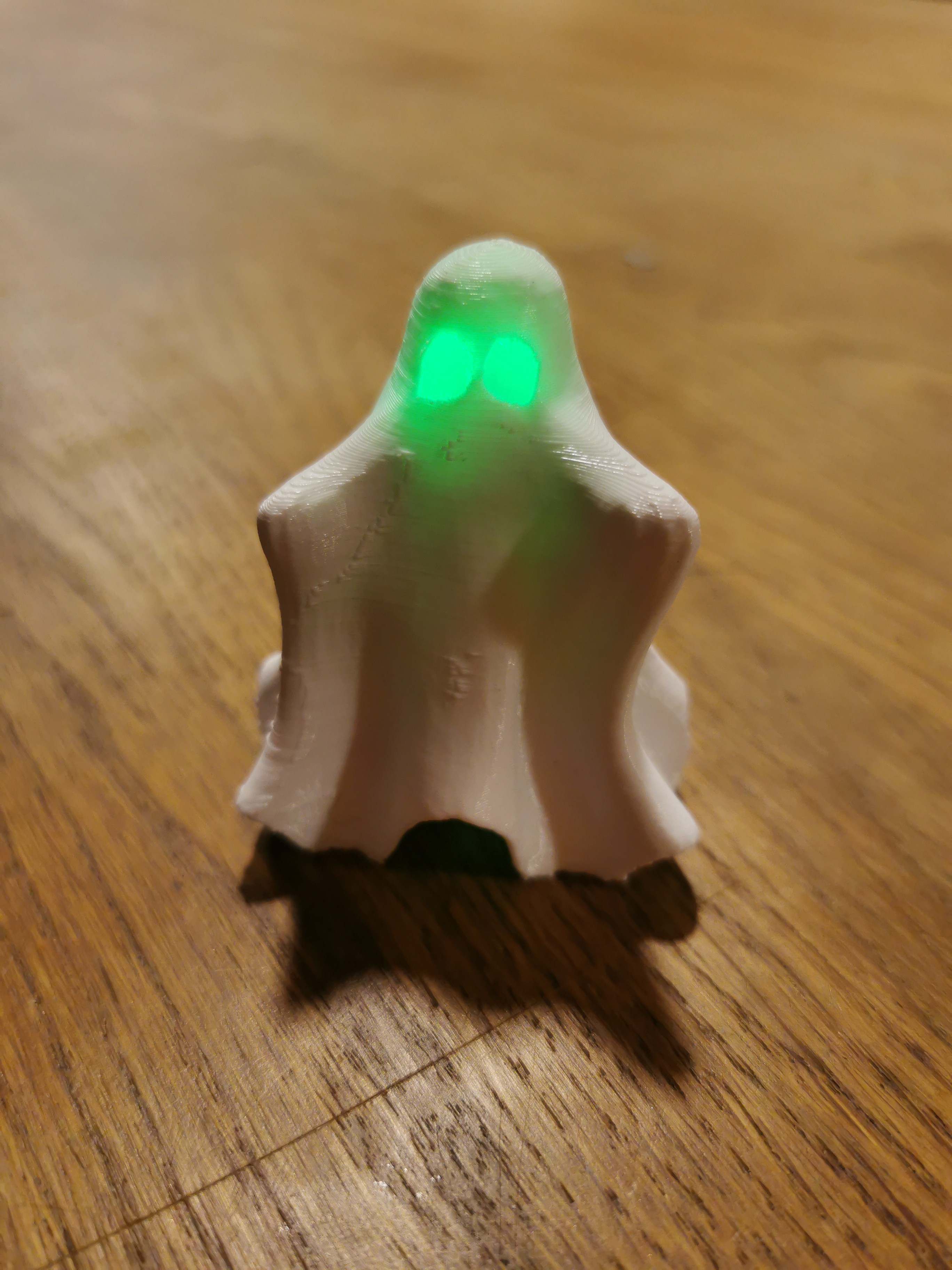 Make your own light shy ghost for Halloween.

1) Print out the ghost

3D print the "Cute hug me ghost" by gCreate from Thingiverse.

2) Collect all the components

At NTNU you can easily buy all the electronic components from Omega Verkstedet for a few NOK.

If you don't know anything about circuits you can ignore the circuit diagram and just look at how the components are physically placed and connected on the protoboard.

Suggested position of all the components (seen from above):

More details about the orientation of the components:

The only components that can be connected incorrectly are the LED, transistor and +/- from the battery. The other componets don't have a specific orientation. The two resistors ("motstand 1" and "motstand 2") can be interchanged.

Push the wire through the holes in the protoboard (to get a sturdier connection), then solder them or just solder them in place if they are too thick.

How the transistor is orientated:

For BC546: If you hold it so that the flat side is towards you the legs are collector, base, emitter.

NB: Other NTN transistors may have the legs in a different order. Google "datasheet [transistor name]" and look at the correct leg order for your transistor.

4) Solder the components together

How to connect the components together (equivalent with circuit diagram):

If you have a large protoboard it should be cut so that it fits inside the ghost.

It is recommended to solder the LED and photoresistor so that they stick out from the board as much as possible. This way it is easier to install the protoboard and get the light and photoresistor at the correct position.

NB: This is seen from above and soldering is done on the back.

Mirrored diagram showing how to solder the parts together when seen from below (while soldering):

5) Test that the circuit works as expected.

The system should turn the LED on when it is dark and off when it is light. Cover the photoresistor / shine a light on it to test it.

6) Glue the circuit to the ghost

Use hot glue to glue the protoboard to the inside of the ghost. Glue it to the back (inside) and the photoresistor to the front so that it is just hidden. The LED should be just below the eyes, so that it is hidden.

Either glue the battery holder or connect it with tape for easier change of battery.

You should now have a functioning ghost!

7) A bit about how the circuit works

It uses a transistor as a switch to turn on/off the LED. The transistor turns "on", allowing current to flow through it, when the voltage of the base is 0.7 V higher than the voltage at the emitter.

You can measure the resistance of the photoresistor using a multimeter to adjust the circuit to trigger at different light levels.

For this ghost a resistance R1= 43 kΩ is a good value, which is created using two resistors in series.

Are you sure you want to delete?
Delete
Cancel
﻿